Who are our Enemies?

by Ronald Steed/ May 28th, 2016
Sermon for Sunday, May 29, 2016 (2 Pentecost Proper 4)
St. David’s Episcopal Church, Gales Ferry, CT
Put away from us, we entreat you Lord, all hurtful things, and give us those things which are profitable for us.
I had a lot of memorable patients as a hospital chaplain. One of them was a homeless man named Frank… well, I think he was homeless; he didn’t say actually. But when I walked in his room, he was wearing one of those “mad bomber" hats that some people wear in winter. And his face had that grizzled, gaunt, rough-hewn look that I have seen on people who have spent a lifetime living or working outside. Cattle ranchers, oil derrick operators, open-ocean fishermen, and homeless people sometimes look like that. It took about 3 seconds to realize that Frank also had a little mental health problem, at least judging by the way he rambled and ranted. He had rough language that sounded like his face looked, with hard edges and words that you don’t often hear at St. David’s. So after we got introduced to one another, I sat down to listen to his story.
Frank told me was about his parentless childhood as a headstrong, rebellious, I’m-not-going-to-take-it boy living in a Catholic orphanage in Ohio. He told me about scandalizing the nuns and priests, and he was pretty proud of that. One of the things I learned in Chaplaincy is that the stories people choose to tell about their past are often ones that illustrate their present situation, and that was certainly true in Frank’s case. He was everyone’s enemy, and he didn’t mind saying that to their faces. Anyone with authority; policemen (I think he had met a few), shop owners… anyone who was wealthy (and that would mean just about everyone but him in Frank’s opinion)… anyone who was religious (he told me about his made-up “church")… anyone who whined about being poor or in need (as he put it), and anyone who would have the gall to help the poor (“let ‘em starve if they won’t take care of themselves" Frank said)… a really surprising idea for a homeless person, but Frank’s view of the world was that it was him against everybody from his earliest days… everybody was his enemy and he could hold his own against them all, thank-you-very-much, with threats, fighting-words, and I suspect, violence if it came to it. Frank, it seemed to me, tried very hard… VERY hard to be difficult to like. He would just as soon spit in your face as to look at you. (I’ll just note for the record that Frank and I got along well… giving him attention and a couple inviting questions was something Frank did not get very often I think). But there was ONE person that Frank was fond of… a woman who managed the night shift at a local gas station. This woman had a withered arm, and Frank described tenderly how she would have to reach across with her teeth to pull on her sweater. Frank was her champion… the defender of her cause… and woe to any customer who was cross with her or tried to cheat her. Frank would “mess them up". Frank… the enemy of power and privilege and pretension, was also a defender of the weak. That was his theology. In fact, he was in the hospital because his feet had gotten badly frostbitten while shoveling snow at the gas station so this woman wouldn’t have to.
In today’s Gospel, Jesus encounters an enemy… a Roman Centurion and an occupier of Israel… an officer of a foreign power. 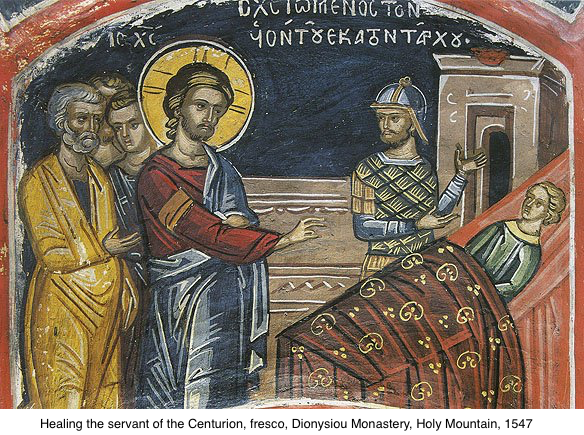