Heaven and Earth Fit Together and Intersect...

by Ronald Steed/ January 12th, 2017
Sermon for Sunday, January 8, 2017 (1 Epiphany)
St. David’s Episcopal Church, Gales Ferry, CT
(missed due to weather)
Today’s gospel reading about John’s Baptism of Jesus is short and tidy, but there is a lot to unpack in this milestone event. You can follow the narrative in your bulletins and imagine that we are there, standing on the riverbank, watching what unfolds.
The story begins with difference and conflict. John thinks Jesus should be one thing; who Jesus actually is, is something else. John preaches repentance and warning: a messiah who will pick up that ax at the foot of the tree and start chopping. Jesus has something else in mind. That difference leads to conflict… It’s not violent conflict of course, but John the Baptist would have prevented this action. What Jesus asks John to do is outside the little box that John the Baptist has placed him in … he asks John to play a role himself in the act of Baptism… to be the instrument through which the Baptism of Jesus occurs. This of course is the consistent strategy of God from the beginning, to work through people who are themselves, part of the problem… but in surprising and counterintuitive ways. This is a pattern throughout the Hebrew Bible, the Gospels, all the way across the Acts of the Apostles, and if we’re observant… right into our own day. God just won’t fit into my tidy box. God breaks out, challenges my notions of what God is up to and invites me to join in the work. Jesus answers John gently… “let it be so" and John consents. So this is a recurring pattern: difference-conflict-surprise-transformation-consent to work together. 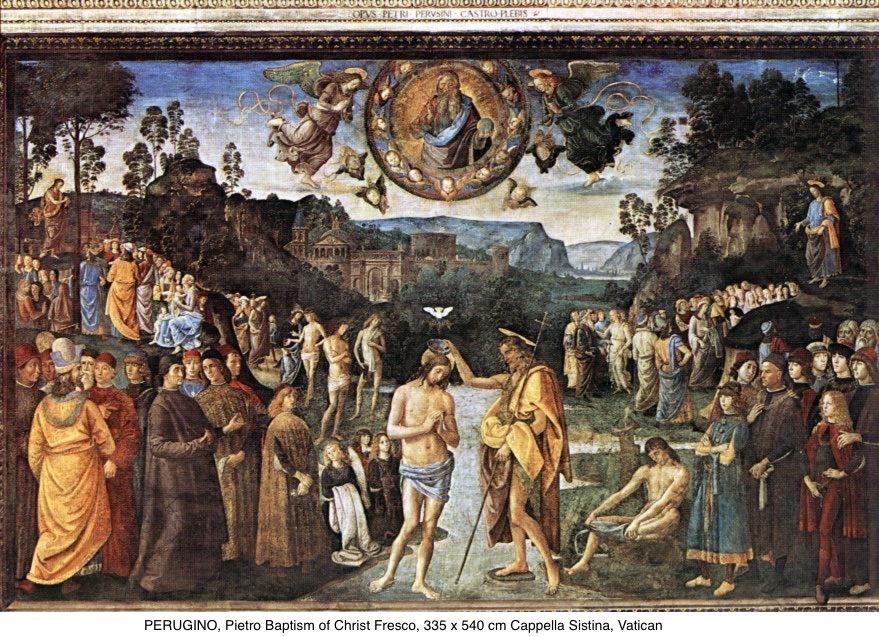 Then, John Baptizes Jesus. Matthew does not say exactly how, but we can imagine that Jesus was fully immersed into the water. When Rachel pours a little water over the heads of babies here in our baptismal font, it is so endearing, and we all smile and chuckle over it. But immersion into the 46 degree water of the Jordan River is anything but endearing. We might imagine John placing his hand on the back of Jesus’ head… pushing him down into the frigid water… holding him there for a while. Jesus has to hold his breath underwater. Have you held your breath underwater? If you hold it long enough though, your lungs begin to burn… you have to come up. Have you ever been underwater in other ways? Holding your breath until the next paycheck? … until the medical test results come back? … until you find a job after you’ve been fired? It’s like drowning… being underwater is like that. And throughout the Bible, water often carries this idea of chaos, risk and death. The chaos of the waters as the Spirit hovers before creation, Israel walking between the stacked up waters of the Red Sea… then walking across the Jordan River into the promised land… the walls of water stacked upstream… Jonah tossed overboard into the stormy sea… Paul shipwrecked after a week of sea storms. Jesus’ immersion… his Baptism and our own, symbolizes his death and ours.
Then Jesus comes up out of the water. From the riverbank, we see John pull him up from the water… as Jesus emerges, he draws a deep, deep breath, filling his lungs with life giving, life-restoring breath (…). This is resurrection… new life. The same thing happens in Jesus’ tomb… his body laying on cold stone that third day. Then suddenly (….) a massive, deep breath of new life… resurrected life… fills his lungs. Paul says in his letters to the Colossians and to the Romans: “…when you were buried with him in baptism, you were also raised with him through faith in the power of God, who raised him from the dead." The baptism of Jesus, carries all this resurrection meaning.
The final action of Matthew is the opening of the heavens, and the descent of the Spirit of God on Jesus. This is a place and a moment when heaven and earth come together as they are designed to do… it is a “thin place" as the Irish like to say. Have you ever been in a thin place or experienced a thin moment, when you have this strange sense that heaven and earth intersect and interlock? I was walking in the woods near Lantern Hill when the path opened into a spectacular hollow… I don’t know why, but I thought… this is a holy place… a thin place. I stood quietly for a long while to take it in. In Exodus 40 the Spirit of God descends into the tent of meeting “and the glory of the Lord filled the tabernacle. Moses was not able to enter the tent of meeting because the cloud settled upon it, and the glory of the Lord filled the tabernacle." Centuries later, in the First Temple in Jerusalem, Second Chronicles says “When Solomon had ended his prayer… the glory of the Lord filled the temple. The priests could not enter the house of the Lord, because the glory of the Lord filled the Lord’s house." When the Second Temple was built after Israel returned from exile in Babylon, nothing like this happened. The Spirit did not fill the new temple. So there was a sense… a strong one at the time of Jesus, that in some strange way, Israel was still in exile… she was not yet forgiven for her sins. I can’t emphasize enough the anticipation that people had at Jesus’ time that God’s return was close at hand. The descent of the Spirit on Jesus was that moment… and in a shocking and surprising way. The Spirit did not fill the Temple, it filled Jesus, the New Temple. What does this say about Pentecost, when the Spirit filled each of the disciples? And what does it say about us, who are similarly filled and indwelled by the Holy Spirit?
The narrative continues beyond today’s reading with Jesus being sent into the desert and then into the work of his mission. As Jesus was sent, so are his disciples… the sending of the 70 in Luke 10… the sending of Paul to the Gentiles… the sending of us each Sunday into the world to carry on the mission of God in our neighborhoods.
So this short, pithy Baptism of Jesus, incorporates all of these Gospel themes; difference, conflict, transformation, collaborative work, struggle and death, new life and resurrection, the indwelling of the Holy Spirit, and the sending out into the world. All of this is good news! As we renew our Baptismal covenant together on this day, remember that in our baptism, we have died with Christ and been raised into new life… we have been filled with the same spirit that filled Jesus, and we are being sent into our neighborhoods and towns to work for the mission of God: healing, reconciliation, and restoration. During the Epiphany season, we will read and hear of the ways Jesus manifested in the world. Look for him in the world around you. Look for thin places and thin moments where heaven and earth are interlocked and interwoven. You may seen this at St David’s, but you may also see it in your neighborhood… in coffee shops and grocery stores… you may see it in people who are called to join in God’s mission… among peacemakers, and quiet people… among those who are mourning and who are merciful. Help others see the spirit that dwells in you… help them to experience thin places in your presence. It’s not a rare thing… heaven and earth are intended to fit together and intersect… it happens all the time. Amen.