Putting Your Fingers in the Wounds of Christ...

by Ronald Steed/ April 4th, 2016
Sermon for Sunday, April 3, 2016 (2 Easter)
St. David’s Episcopal Church, Gales Ferry, CT
The Lord is my strength and my song, * and he has become my salvation.
I have a good friend named Barbara who lives not far from here. Barbara is an Episcopalian and we have worked together on some projects in our Diocese. Over coffee recently, Barbara told me a really interesting story. She has retired from her work, and so she has some anxiety about what to do with her life now. She’s pretty settled about what she is NOT going to do any more, but it’s a bit of an open question about what she WILL be doing. Whatever it is though, she wants it to be substantive. A friend of hers, knowing that she would now have some time on her hands, invited her to visit a meeting of the East Lyme Herb Garden Club. Now, the invitation was a bit of a crises for Barbara… she was thinking to herself… “No…. not me. I do not want to spend my retired years in a Garden Club debating the niceties of this or that cultivar of Basil". But out of regard for her friend, and because she had asked, Barbara went to the meeting. What she discovered amazed her… these were women who had a substantive, ambitious agenda… basil was the farthest thing from their minds. Instead, they are putting together a garden at the Women’s prison in Niantic… working alongside the women there to grow an herb garden, and through that garden to heal one another… healing not just for prisoners, but for Garden Club Members too. When Barbara heard that, she was all-in… she pushed all her chips into the middle of that table and she is going to garden together with inmates. Now… WHY would she do that? I think because she recognizes a pattern of ministry that she has seen before…. She knows what might happen in that garden. And it is a pattern that WE would recognize in today’s gospel…the story of Doubting Thomas.
“Don’t be THAT guy. Don’t be like Thomas, the one who got on his high horse and doubted that Jesus was resurrected. Be the one who doesn’t have to see to have faith" That is often the way I have read John’s version of “Doubting Thomas", and the way I have sometimes heard it preached. But I’m beginning to think that there is a lot more going on in John than I might have thought in the past. I’m seeing it with new eyes now… you might too. I think John has something important to suggest to us… specifically us at St. David’s about Thomas.
One of the consistent features about the resurrection stories of all fours Gospels (and consistency is hard to come by in the gospels) is that in every account, people seem to have a hard time recognizing Jesus. Rachel talked about this on Easter. At first glance, folk seem to mistake him for a gardener, or a fellow traveller on the road, and these are people who knew him WELL… not just a little bit. Some… not just Thomas… are said to doubt. Now if the early Church were just making up a compelling cover story to explain away the empty tomb, the narrative would not have any room for doubt… everyone would recognize him! But it seems to be, that in every telling, there are some who weren’t quite sure who they were looking at, and that was a fact that the early church had to honor in their telling of this very strange story. Maybe Jesus just looked younger… had a haircut… looked less worn by three years on the road… who knows? But there seems to be something about Jesus’ resurrection body that isn’t quite the way it was in his previous life, and the seeds of doubt are scattered all over the four resurrection stories.
So let’s focus on Thomas. Thomas says plainly what everyone really has on their mind. “‘Unless I see the mark of the nails in his hands, and put my finger in the mark of the nails and my hand in his side, I will not believe." So, Jesus invites Thomas to ‘Put your finger here and see my hands. Reach out your hand and put it in my side. Do not doubt but believe.’ The narrative does not say what Thomas actually did, but we can imagine him reaching out, his hand trembling, and putting his fingers into the wounds of Christ’s hands… and then reaching with his hand to put it in the wound of his side. And then… Thomas has a moment of profound conversion like no other in any of the Gospel stories. For the first time, someone declares ‘My Lord and my God!’ That does not happen anywhere else in any of the Gospels. Jesus is declared to be God himself. 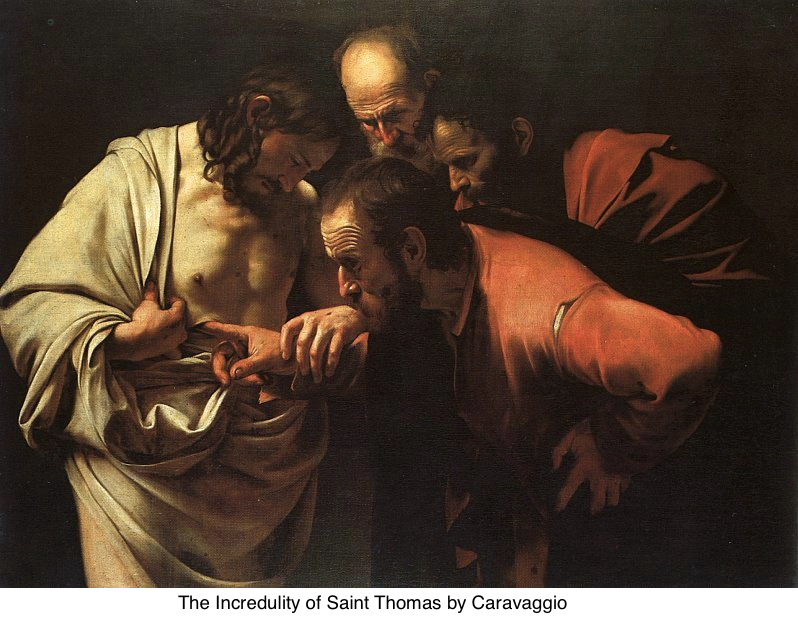 Who do WE say that Jesus is? For some, Jesus is a great teacher… like Gandhi or Martin Luther King. WHY would we say that? Because he is and we can believe that! He offers wisdom like few before or after. Others might say that Jesus is a great prophet, like the prophets of old. We are starting a study here at St. David’s very soon about Jesus as prophet. Others might say that Jesus is the Messiah of Israel. At the high point of Mark’s Gospel in Chapter 8, Jesus asks his Disciples “Who do people say that I am?" And they answer him in various ways. And then Jesus asks them (and us by the way) “Who do YOU say that I am", and Peter answers “You are the Messiah". Now, with our modern ears, we hear “Messiah" and think “Ah yes, the second person of the Trinity!" But no… the title “Messiah" does NOT mean that Jesus was divine… divinity is something else altogether different than Messiah… that is not in the job description. It means the anointed one, and there were many others who claimed to be Israel’s Messiah before and after Jesus and NONE of them claimed to be divine, and nobody thought that was a strange omission. Jesus himself does not explicitly claim to be the second person of the Trinity, although he certainly drops a lot of hints along the way that he might be. Only Thomas gets beyond the great teacher… beyond the prophet… beyond Messiah… beyond “Son of God"… to state emphatically that Jesus is somehow God himself. THAT is a remarkable claim. And far from being something that Thomas should be ashamed of, I think that this is really to his credit.
I think John told the story this way to help his early community of Christians, and US today, to understand something important about HOW some disciples might make the journey from believing that Jesus is a Great Teacher to believing that Jesus is God himself. John seems to be saying “As a disciple, you have to be willing to put your fingers into the wounds of Christ… into the wounds of the world… to see the face of Jesus in the face of the other… in order to witness first hand the healing power of God. And witnessing that power is only possible if YOUR fingers are in THOSE wounds." I think that is what Thomas is telling us. Many of you have who have made that journey… you have been driven to your knees with “My Lord and my God" on your lips have done so precisely because you have put your fingers into the wounds of this world. I know this because I have heard some of your stories.
I think this is what my friend Barbara was thinking when she decided to work alongside prisoners. She is putting her fingers in the wound of Christ and not for the first time… she is going to where the pain is because she knows from experience that there is transformative power there… not just for prisoners, but for her and the other gardeners too.
This is why the work we are doing at St. David’s is so important. It has the potential to be a conversion experience if we are willing to go there. The Body of Christ in this place has been wounded… many of you bear those scars. We are putting our hands into those wounds… not looking away and pretending they aren’t there… but dealing with the hurt and the suffering of our friends AND our enemies… and we are witnessing the healing of the Holy Spirit that is already at work among us.
This is also why our five discernment teams are so important. And here I’m going to make a point that might sound a little counter-intuitive… if all we’re going to do with those teams is have a checkbook ministry or collect goods to give to charities, then we are going to miss out on the possibility of encountering the risen Christ. We will essentially be paying for someone else to have that experience. There is nothing wrong about raising money and goods for charity, so please don’t hear me the wrong way on this… it is good and holy work. But if that is ALL we do as disciples, then we are missing out on the Thomas experience. We have to put our OWN fingers into the wounds of the world. In the homeless, the hungry, those in prison, the sick and the suffering… those who are all alone. Only then will we see what Thomas saw… that the wounded Jesus was God himself. You may think you are there to minister to a homeless neighbor, but you may find that THEIR wounds are YOUR salvation… I sure have… Barbara has. Only then is there the possibility that WE will see that Jesus is more than a great teacher, but is God himself.
This is my prayer for Barbara and for all of you… that you will stick your fingers into the wounds of Christ, witness the healing power of the Holy Spirit, and get driven to your knees and say “My lord and my God"…. Do not doubt but believe. Amen.
« Back To List
comments powered by Disqus