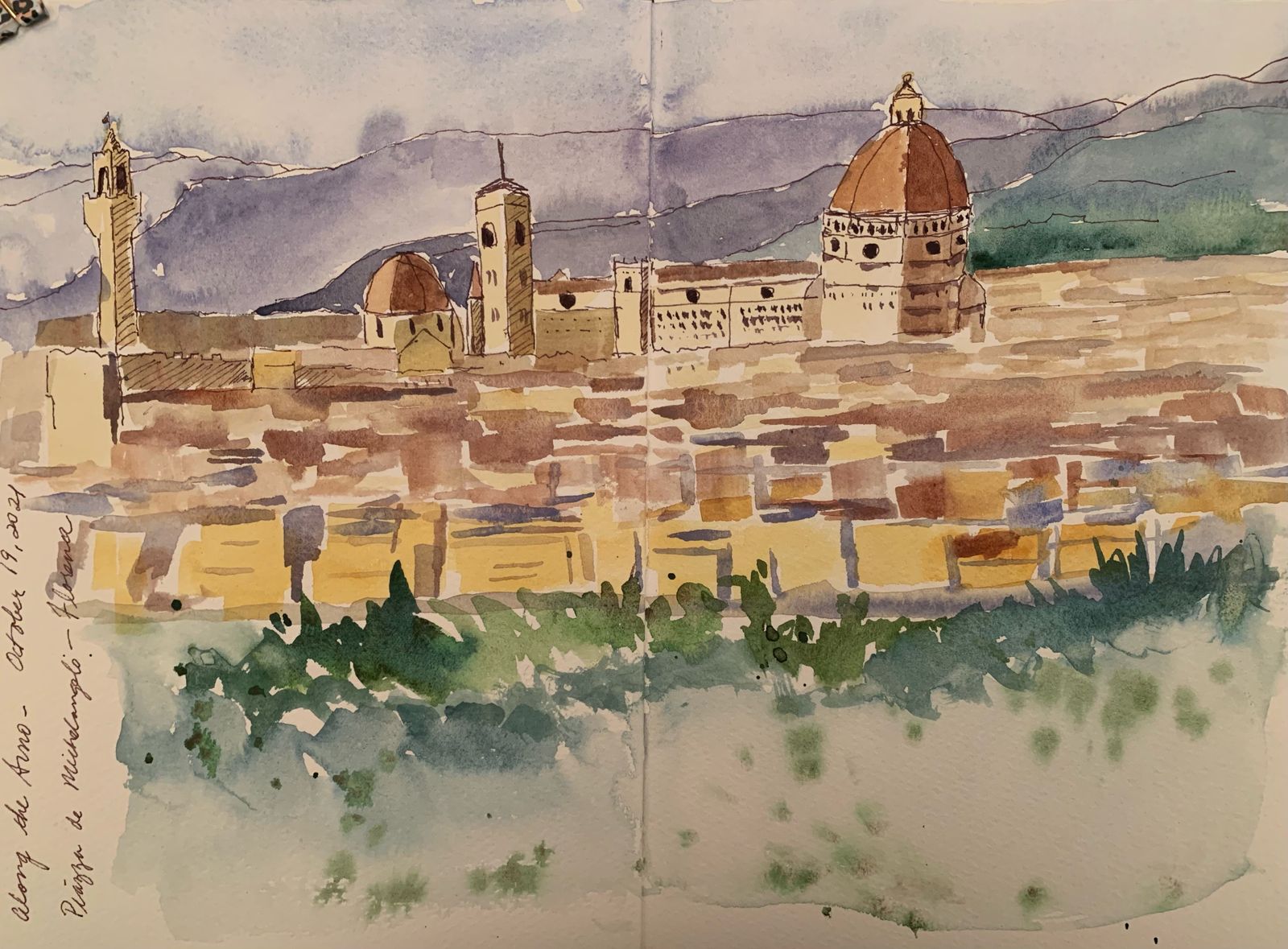 This haiku moment at the Piazzale Michelangelo overlooking the City of Florence Italy, Tuesday late afternoon, October 19 , 2021:
The view is high as the dome of the Duomo. We are gathered on stone steps with a festive crowd of mostly young people who have come to watch the sun set over Florence. Everyone chatters happily in tongues, although it is the lilting Irish accents nearby and sing-song Italian that really make the ear smile. One of the three American girls walking down the steps, asks her friend as she passes: "Are you going to tell your parents about the tattoo?" We chuckle, knowing we probably would have had to pretend NOT to chuckle if they were OUR daughters! I miss being young.
Beyond the city stand the hills of Tuscany; the day's heavy atmospherics fogging off the more distant ones until they blend into the haze, giving a nice depth to the scene.
Below us, along the Arno river, all of the buildings on the Florentine side smile into the face of the sun that shines fully on their yellow ochre faces. All of Florence is one huge wheat field of yellow buildings topped with earthy umber roofs. The Duomo is the commanding focal point of the city, flanked by the tower of the Palazzo Vecchio on the left, and the Basilica di Santa Croce on the right.
It promises to be a beautiful sunset. That sky-haze and the earth colors of the city should be quite something to see. So we sit in the joyful present, in anticipation of a something stunning not long from now.
I try more and more to stay in the present of things. To take them in as they happen, rather than trading away the moment impatiently for a promised future. At my age, it seems far more satisfying to be contemplative . . . so much better than worrying my poor parents about tattoos, which I never did, but probably should have; so how do I know any better?!
A mass bell rings in at 4:45 (the Duomo tower? Must be; they are impressive) , for a moment overpowering the panini truck's happy tunes. Call to mass or call to panini; might be a tough choice. Neither will do in this moment. I'm stuffed with pasta and boar sauce from lunch (tough to haul that load up this hill afterward!). Eating is such a lazy pleasure here. . . we were going to look for an art shop after lunch (who looks for writer's shops?), and Roxanne noted that they were closed for two hours. Just enough time to have a great lunch AND a nap! La dolce vita . . . the sweet life . . . .
As the golden hour arrives, bringing out the tones of color across the way , I feel its affect on the tones of this gathering. The sweetness of life sits all around. Cell phone cameras take in the scene and selfies, and girls choreograph a tiktok dance on the terrace below us; gestures relatively new in this city's long history. Others are more traditional; couples sit close, talking. . . one whispers in a lover's ear. Someone opens a fizzy drink whose loud pop surprises both the owner and the crowd. Several seconds later, the top clinks on the steps to everyone's delight. Faces glow in the sun's warmth, chattering friends pause a bit as people take in the the bells' joyful tolling of the Angelus.
We all sit happy in the moment, waiting for the sun to set this city ablaze. 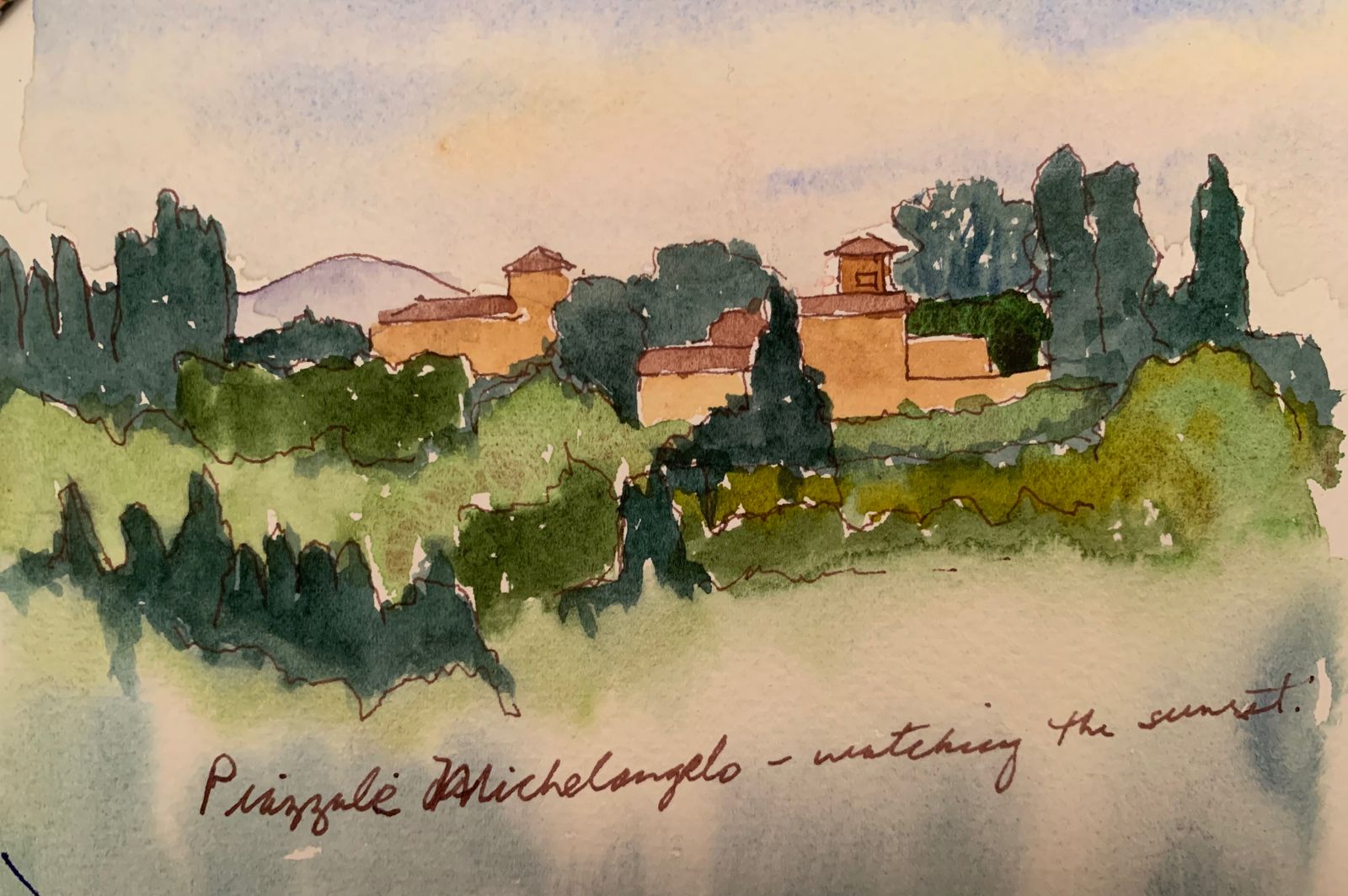