Inviting oneself to dinner with enemies....

by Ronald Steed/ January 12th, 2017
Sermon for Sunday, October 30, 2016 (24 Pentecost Proper 26)
St. David’s Episcopal Church, Gales Ferry, CT
Half of Luke’s Gospel is about Jesus’ journey to Jerusalem at the end of his ministry. We’ve been travelling along The Way with him all summer from the end of Chapter 9 in May to Chapter 19 today. That’s a great literary device, not just because it puts Jesus into a moving narrative, but it puts our own journey of discipleship into the narrative as well. All kinds of stories about what the Kingdom of God is like: healings, the sending out of the seventy into villages ahead where Jesus expected to go, stories about Good Samaritans and about being ready, meals with friends and foes alike, prodigal sons and prodigal fathers, rich and poor people, and dishonest judges. In Luke 17, Jesus says ‘The kingdom of God is not coming with things that can be observed; nor will they say, “Look, here it is!" or “There it is!" For, in fact, the kingdom of God is among you.’ This whole sequence of ten chapters in Luke is a vivid demonstration of this fact… it has a gritty, present, trail-walking quality and most of the stories revolve around relationships as though to say “this journey, the people we meet along the way, the stories we tell, and the way we treat one another is like the Kingdom of God"… right here among us.
The journey is near to the goal when Jesus enters Jerico, about 8 walking hours from Jerusalem and at the beginning of a 3000 ft ascent to the city. When the bible speaks of taking the road “up" to Jerusalem, the ascent is what they are talking about. There in the tree is Zacchaeus, the Chief Tax Collector. Does anyone remember that childhood song about Zacchaeus? "Zacchaeus was a wee little man, and a wee little man was he. He climbed up in a sycamore tree, For the Lord he wanted to see." I’m not going to sing it for you, but I bet there were folks here who could!

Zacchaeus, in addition to being small and recognizable, is also rich, and it is not hard to imagine how people thought this chief tax collector got his wealth, and what kind of relationship he had with his neighbors in Jerico. It is no surprise that people grumble when Jesus invites himself to dinner at Zacchaeus’ house. Incidentally, Jesus is the kind of person who DOES invite himself to dinner, so if discipleship is anything like this journey to Jerusalem, standby for unexpected guests. And that’s important. Jesus initiates the action with Zacchaeus without pre-conditions like “you have to change your ways before I can eat with you". No… he just invites himself to dinner and invites Zacchaeus climb down from the tree! It reminds me some of Jesus’ healing stories where he just reaches out and touches a leper, and to everyone’s amazement, Jesus doesn’t get leprosy… Jesus doesn’t become unclean by touching an unclean person. Rather, the flow of healing goes the other direction and the leper becomes healed. The dark does not overcome the light. So it is with Zacchaeus. 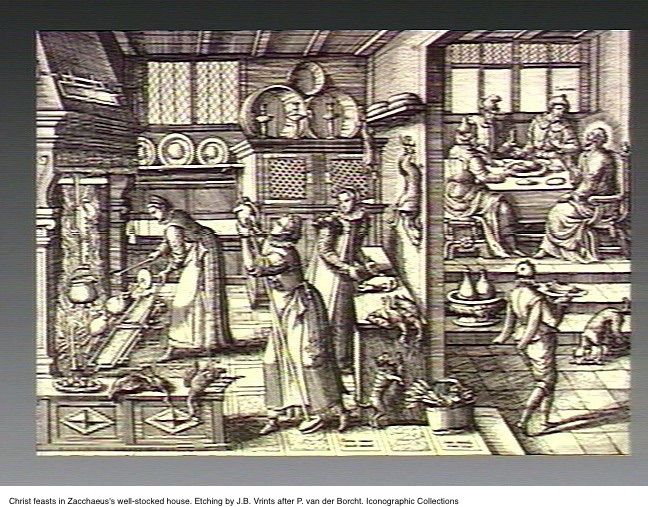 We are not really told about Zacchaeus’ conversion; the turning of his heart. But it is clear from the story that he knew who Jesus was AND, he knew what Jesus might want him to do as a disciple. Do you suppose there was a pair of the 70 who visited Jericho ahead of Jesus and spread that word to Zacchaeus and his neighbors? I wonder. What we DO hear in the story is the very start of transforming the conflict in that community from one of animosity, toward one of new relationships… new possibilities. Climbing down from that tree, Zacchaeus proclaims his first act as a new disciple; to have a relationship with his poor neighbors (a form of healing) and to restore broken relationships with those he might have defrauded (there’s reconciliation and restoration). It is not hard to imagine Luke telling new converts in his own community, “First, establish relationships with the poor because God seems to have a special love for them, and repair the broken relationships that you can." I wonder if we don’t hear about Zacchaeus’ conversation of heart, because, for many people, conversion of heart really begins when they experience new relationships with the poor (and there are many forms of poverty), or repair broken ones.
Look at how Jesus responds to Zacchaeus. “I must stay at your house today" becomes “today, salvation has come to this house." Think about that salvation. Jesus declares it present, here and now and in THIS house… not in some remote and distant future… not in heaven… but here on Earth in THIS life…in this homeless shelter, in this community food center, in this neighbor’s kitchen. And I think it is not a stretch to think of this salvation also extending to his poor neighbors, and to those whom Zacchaeus defrauded. There is salvation for them too THROUGH the action of this new disciple. That is the strategy of God: to restore creation THROUGH people who are themselves a part of the problem… people like Zacchaeus… people like me… people like you. Jesus summarizes the whole purpose of his ministry and bookends the entire journey to Jerusalem this way: “the Son of Man came to seek out and to save the lost."… lost people like Zacchaeus… lost people like me… lost people like you. That’s good news.
I wonder what happened to Zacchaeus after Jesus left town? What was his new life like? Did people simply turn away from their former animosity and embrace him like a favorite friend? Was his new generosity in wealth met with a corresponding spirit of forgiveness? Did former enemies come up and say “Come Zacchaeus, let us collaborate together on how we might make Jerico a better neighborhood for everyone…"? I wonder. Jesus’ ascent from Jerico to Jerusalem is a hard one and there is a cross before there is resurrection. I’d be willing to bet that Zacchaeus had a similar cross-shaped experience as a disciple. We might too.
Jesus seeks out and saves the lost… that is the good news. And it is a PRESENT salvation… here and now… in THIS life with THESE neighbors. God’s creation is teeming with difference. For so many people, that difference leads to conflict and conflict leads to violence, injury, destruction, and death. For many, violence is the very thing that creates order out of chaos… violence is the tool our world reaches for all the time. Jesus does not erase differences and he does not eliminate conflict on the road to Jerusalem, but he shuns violence. Instead, he invites himself to dinner with enemies and makes them new friends… he reaches out and heals people others recoil from… he invites us to transform conflict into something richer and more harmonious. It is hard… it is a steep climb up a rocky ascent… it is cross-shaped. But at the end, there is resurrection… in this life… in this town… in this parish. That is the Gospel according to Luke. Amen.