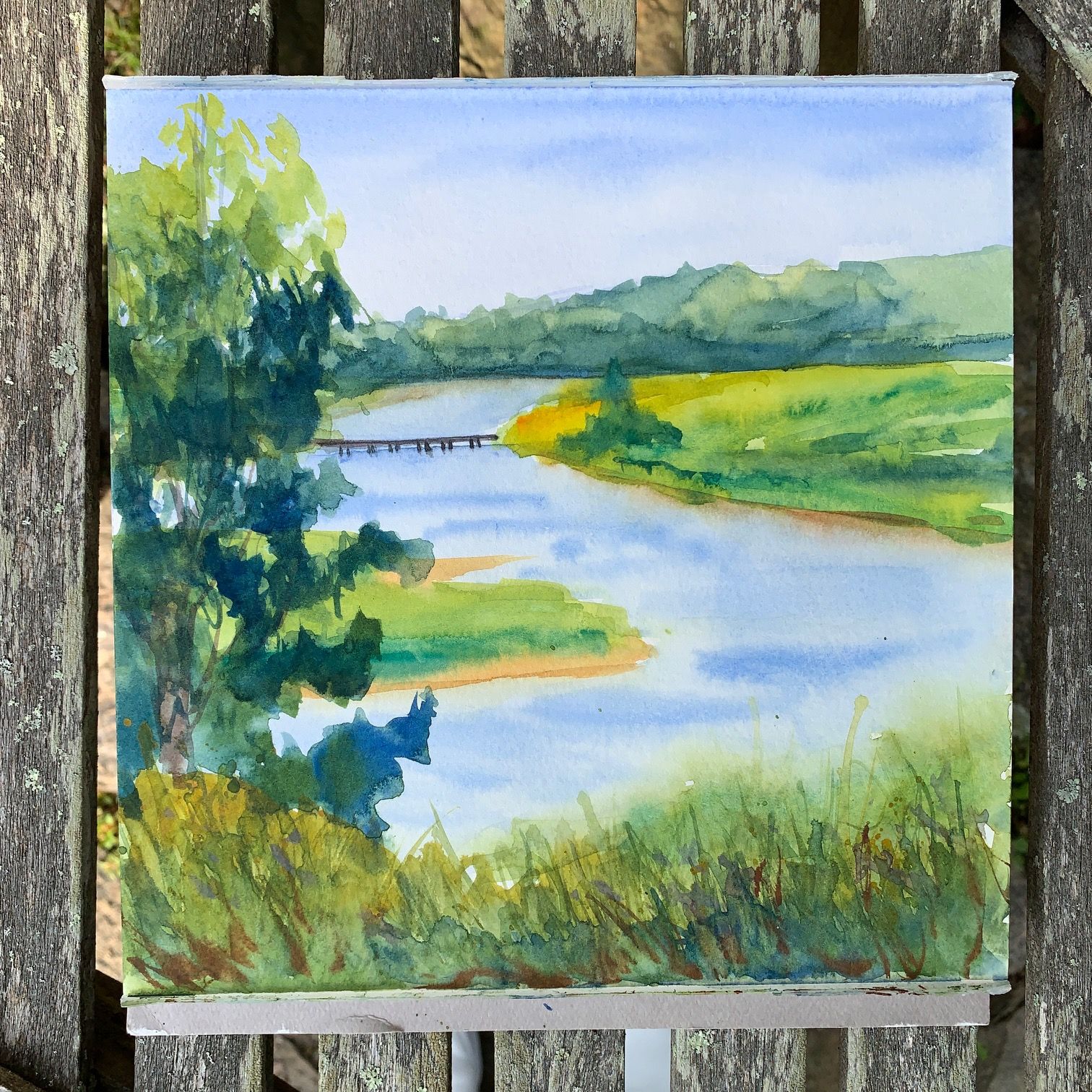 cross small troubles
tend to bigger ones -
bridge over goshen
This haiku moment, July 31, 2021:
This bridge, painted in watercolors on site by my wife, artist Roxanne Steed, crosses Goshen Cove at Harkness Memorial State Park in Waterford, Connecticut . While Roxanne painted, I observed the scene with her from a high open field above the cove. As we composed, small groups of people gathered along the shore below us to take in the scene from a distance, where they could watch and not disturb. 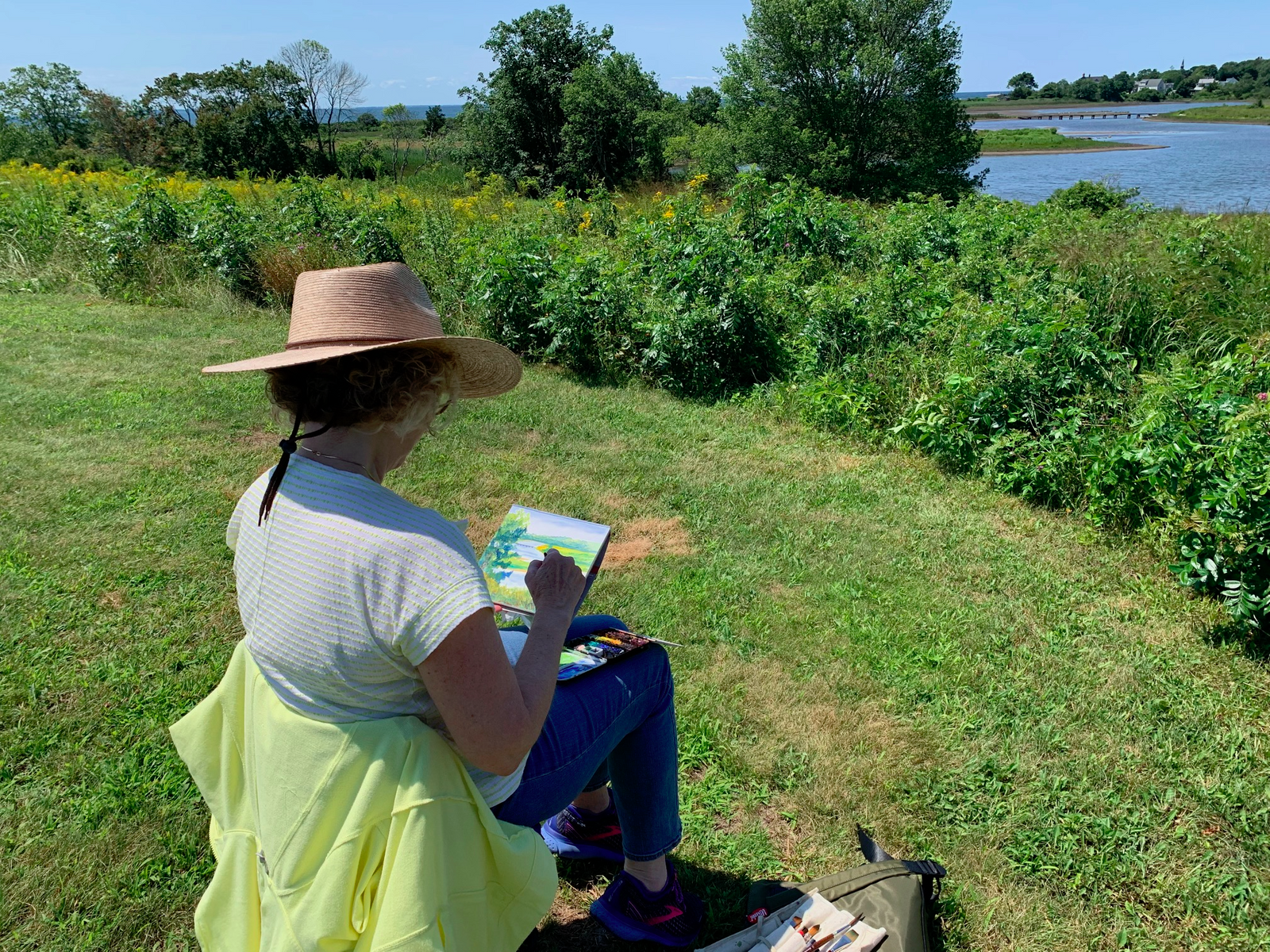 In the near-noon light of this brilliant and mild summer day, the light and shadow focused the eye on this bridge in the middle of nature. The "z" shape of the cove also drew the eye to the bridge from above and below. The haiku moment called to mind the reason for this bridge in this place; why is there a bridge here at all? Who needs to use it and for what aim?
Humans build bridges to cross over hazards not easily navigated, to reach a desired place. In this case, the hard-to-cross waters and muddy bank of Goshen Cove, to reach an isolated and desired part of the William A Niering Natural Area on the Long Island Sound side of the park.
Over years of visiting this park, I have never seen anyone on this bridge, and that's a good thing. The cove is teeming with wildlife. It would be difficult to wade across the cove to the preserve on the other side. Someone had to work in that hazard to erect this bridge however; to set the footings and place the trellises. The effort was not trivial.
While the bridge attracted the eye to the scene, the dynamics of nature drew attention to other actors. And these seemed oblivious to the troubles humans are trying to bridge. Bees buzzed around the goldenrod and cornflowers in the foreground field. Dragonflies patrolled the skies, not too far above, while Seabirds crisscrossed high over the cove, resting on the mud flats just beyond the bridge. Two ospreys tended to the cove, proclaiming their presence. In the distant cove-waters, I imagine all kinds of life pass around and under the bridge without trouble. The only ones who seem troubled about this cove, in fact, must be the humans who desire to cross it.
Now, I'm sure there are excellent reasons for this bridge, given the effort to build it . . . a desire that made its construction compelling. A few folk to need to cross over these waters without disturbing other things, so they can protect the piping plovers and least terns who nest in the protected dunes on the other side.
Perhaps then, the real desire that resulted in this bridge, was to tend to another kind of trouble, less obvious than trudging though mud and salt water, but far more impactful. Maybe this bridge helps some to protect a threatened creature in a delicate habitat that humans would easily ruin, given access. Two increasingly rare members of the natural community, who if lost, will damage the balance there and in other places. While nature might not "see" this trouble as she thrived on this perfect summer day, some people do; more power to their vision.
The haiku moment called to mind the human effort to make a small and salient thing in nature rarely used, to protect a small thing rarely seen. 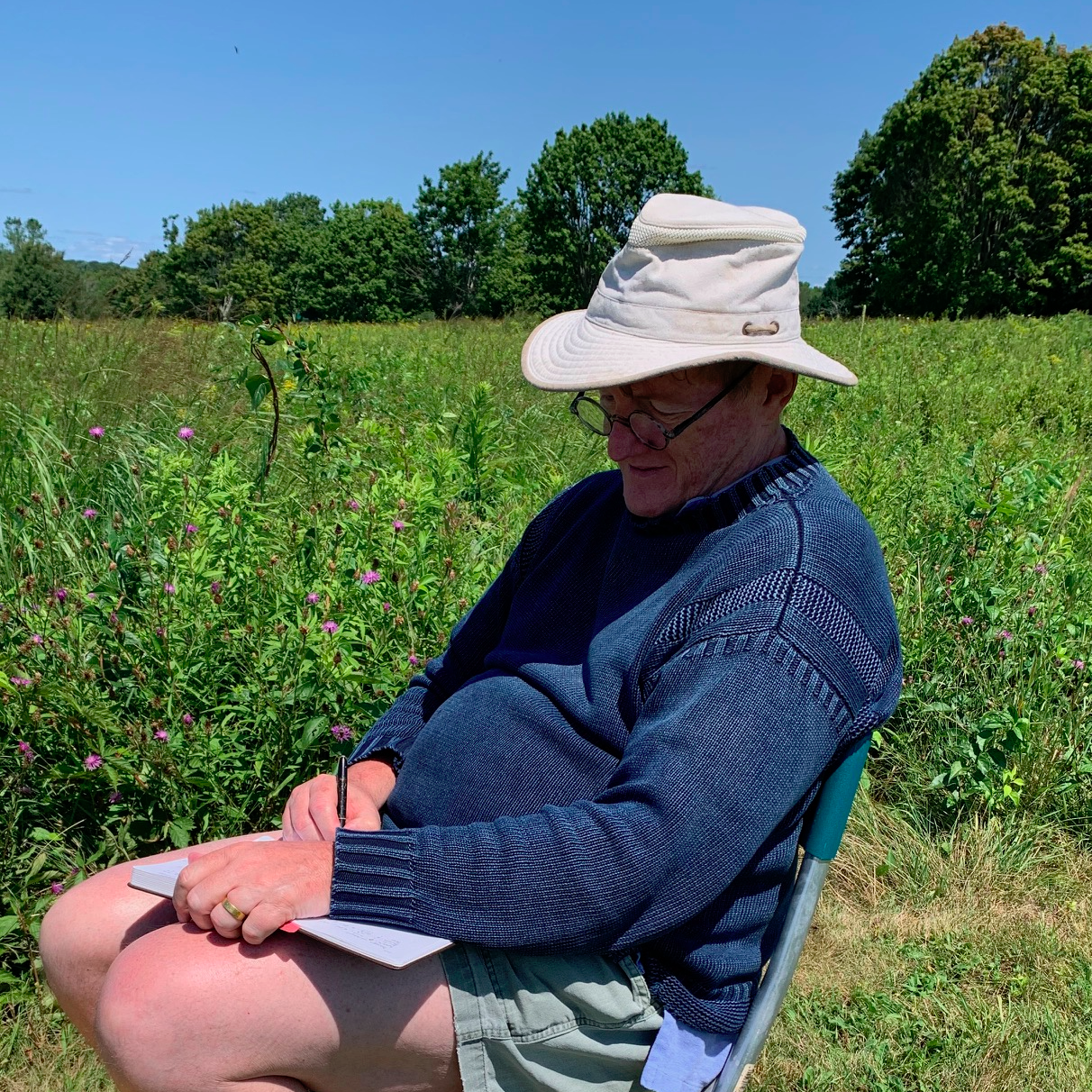 Where there's a bridge, there is a human desire for a place to be reached, and a trouble that needs crossing over. In this place, that desire is to cross over a small trouble to tend to a larger one. Humans are thankfully kept as distant observers of this place from the shore, and occasional visitors with the power to preserve or destroy. To the natural community that flourishes there, the cove waters are no trouble at all, thanks in part to the ones who help to keep it seen, but rarely visited by humans.
Painting by Roxanne Steed
Haiku and meditation by Ronald Steed
Copyright 2021 ©
« Back To List
comments powered by Disqus