by Ronald Steed/ November 26th, 2014
I'm going to expend a little Karma on the Ferguson topic and try to explain my own understanding about the rage that African Americans might be feeling. For the sake of transparency, I am white and upper middle class. The issue is applicable to this forum because it is an issue of fundamental injustice against people who have been marginalized and excluded from American society. The Church has (or should have) plenty to say about that.
Police should give the same deference to black people during encounters that they give to white people.
Young African American men are 21 times more likely to be KILLED in a police encounter than their white counterparts... 21 times! (read it here[1] ). If you are white, you have probably never been "stopped and frisked", but that is the routine experience of many black people. If you are white, you have probably never been pulled over in your car for "driving while white", but the daily driving experience of black people is to be pulled over for "driving while black". ONE in SIX African American men are in prison for crimes that are committed AT THE SAME RATE (or higher) by white men (read it here[2] )... that's one sixth of the African American population in the U.S.! That is incredible! Really... not a credible situation. And fully ONE THIRD of all African American men are in SOME form of judicial supervision (read it here[3] )... ONE THIRD. Look at this graph of the EXPONENTIAL growth in prison admissions among African Americans compared to their white counterparts: http://goo.gl/s6TCft[4] That's not right. 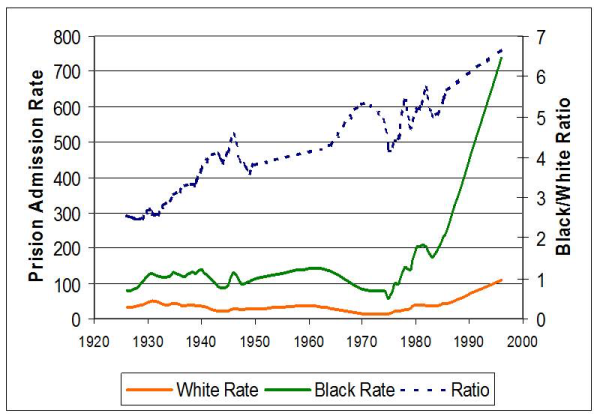 White people see the justice system as fair and impartial. Black people see it as rigged against them.... and they're right... it IS. Whether Michael Brown's death was justified in the context of his police encounter is only mildly interesting. The more relevant issue is that he was far more likely to be killed as a result than a white counterpart. From the black perspective, it seems as though a potential white criminal's life "matters"; a potential black criminal's life does not. The facts... the FACTS folks... suggest they are right. It is the NEW JIM CROW.
Finally, with regard to the Brown case, the power to control the escalation of police encounters with suspects is almost entirely in the hands of the responding police officer. Whether or not the officer was justified under the law to use deadly force in this case, the issue is really why he chose to escalate the encounter the way he did with the suspect, to the point where he chose to use deadly force. The facts cited above demonstrate that police are 21 times more likely to kill a back male suspect than a white male suspect. Part of the reason for that MAY be that they are far more inclined to escalate black encounters to the point of deadly violence. The police have the law on their side, the firepower on their side, and the judgment about the encounter on their side. They seem to be using those tools preferentially against black men.
Just as God seems to have a "preferential option" for the poor, the criminal justice system in this country seems to have a "preferential option" for the white. The Church needs to advocate vigorously against this injustice.
« Back To List
comments powered by Disqus